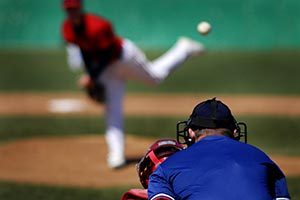 History was made Sunday night as the Marlins and Braves played a game at Fort Bragg. It was the first MLB game ever played in the state of North Carolina.

The Fort Bragg Game — which began at 8 p.m. EDT on Sunday was televised nationally on ESPN — represented a couple of firsts: For one, and most important, it was the first time any professional sports league will hold a regular-season game on an active military base. It was also the first time the state of North Carolina hosted a regular-season Major League Baseball game.

The story of the field, and the stadium, is one of most interesting sub-stories of this entire event.

In the span of a little less than four months, Major League Baseball constructed a 12,500-seat stadium atop what used to be part of the old Willow Springs Golf Course. Before construction began, the land had become a barren, overgrown field that barely resembled a golf course.

A new 12,500 seat ballpark was built specifically for this game, and in the coming days, it will be converted into a “multipurpose recreational facility” for servicemen and their families. The park, which was paid for by MLB, was built on an old golf course.

Although the ballpark had normal dimensions — 331 feet down the lines, 387 into the gaps, 405 to center — it played very big Sunday night. The wind was blowing in and fly balls seemed to die in the air even when they were squared up well.

The gift of the field is a meaningful one for the Fort Bragg community, given that in the past 10 years the base has lost approximately 20 athletic fields because of construction or other projects.

The pregame flyover was amazing. As always, the National Anthem was played prior to the game, and this one was complete with a special military flyover – Black Hawk helicopters, if you’re wondering.

On Sunday, the Atlanta Braves and Florida Marlins played an historic baseball game at a remarkable American venue, and they did it for another reason that can never be questioned. They played the Fort Bragg Game to simply say, “Thank you.”

The Marlins won the game 5-2 (box score), though the on-field action almost feels like an afterthought. The fans were very into it and the players seemed truly thankful for the opportunity to participate in this historic event. The players seemed to be more thrilled to be in Fort Bragg than the fans were to have them in town.

During the ESPN broadcast commissioner Rob Manfred explained the Fort Bragg event came about as part of MLB’s initiative to bring baseball to places it’s never been.

So needless to say, Sunday was among the most unique days in North Carolina sports history and we are extremely humbled and proud that Ecostyle Chauffeured Transportation was the official transportation provider of the first Major League Baseball game ever played on an active military installation.

Sunday, it was all about America: Fourth of July weekend baseball in a ballpark packed to the rafters with honor, patriotism and the celebration of liberty and Ecosyle Team was proud to be a part of this amazing game!